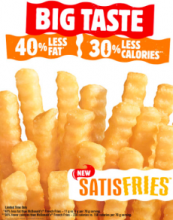 SATISFRIESTM French Fries, with 40 Percent Less Fat1 and 30 Percent Fewer Calories2 than the Leading Fries, are now the Standard Fries in the BURGER KING® Kid’s Meal

Based on the incredible feedback BURGER KING® received from its guests on the taste of SATISFRIESTM, the launch was considered a success and BURGER KING® opted to extend the availability of SATISFRIESTM in restaurants. With this addition to the Kid’s Meal, parents have a new option to serve children their favorite meal with less fat and fewer calories at no additional cost.

“As a parent, I know when it comes to what I feed my child, it’s all about lower-fat foods that kids will actually want to eat – since we all know they are the pickiest of eaters,” said Eric Hirschhorn, Chief Marketing Officer North America, Burger King Worldwide, Inc. “Kids don’t want to give up their favorite snacks. By adding our lower fat, fewer calorie French fry to the Kid’s Meal as the standard fry, we are providing an option parents can feel better about giving to their kids, without children having to compromise on taste.”

Keri Gans, MS, RDN, CDN, nutritionist and author of The Small Change Diet commented, “Kids’ nutrition is extremely important and as much as we want our children to consume the apple slices and fat free milk offered at BURGER KING® restaurants, it can sometimes be a challenge to get them to enjoy eating these choices. Making small changes like including SATISFRIESTM in the BURGER KING® Kid’s Meal can definitely make a difference.”

The BURGER KING® Kid’s Meal options now include a Hamburger, Cheeseburger or Chicken Nuggets served with a small drink, apple slices or a value size serving of SATISFRIESTM French fries. SATISFRIESTM are made with thinly battered real whole potatoes that keep every crinkle crispy on the outside and fluffy on the inside.

BURGER KING® is the only quick service restaurant to serve this unique reduced fat, reduced calorie French fry that has only 190 calories, 8 grams of fat and 210 milligrams of sodium for a Kid’s Meal-size serving.

About Burger King Worldwide
Founded in 1954, BURGER KING® (NYSE: BKW) is the second largest fast food hamburger chain in the world. The original HOME OF THE WHOPPER®, the BURGER KING® system operates in over 13,000 locations serving more than 11 million guests daily in 97 countries and territories worldwide. Approximately 100 percent of BURGER KING® restaurants are owned and operated by independent franchisees, many of them family-owned operations that have been in business for decades. To learn more about Burger King Worldwide, please visit the company's website at www.bk.com or follow us on Facebook and Twitter.

Not all products shown are available in every restaurant. Price and participation will vary. Note: Certain activities provided via this website may be covered by U.S. Patent 6,585,516

Your privacy is important to us. This site may use cookies, web beacons, and similar technologies to facilitate administration and navigation, to better understand and improve our services, to determine and improve the advertising shown to you here or elsewhere, and to provide you with a customized online experience. Please refer to our privacy policy to better explain how we use data on this site.

You are now leaving BK.COM

By clicking on this link, you are leaving the BK.com website to be redirected to an external website that is owned and operated by a third party that is not affiliated with Burger King Corporation. Your use of that website is subject to its terms and conditions as well as its privacy policy.